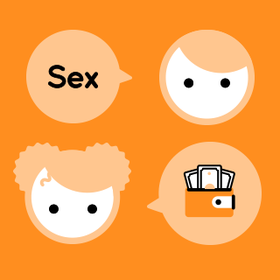 MyStory: I traded my love for good hair

My much older boyfriend pays

Since high school started things haven’t gone my way. I’m 17. My family is poor and we have nothing. It’s been hard.

Then I met this older man. He was 36. When he told me he would do anything to have me, I took him at his word. And he didn’t disappoint. It was thanks to him that I was able to help buy groceries for my family and clothes for myself. It was because of him that I could change my hairstyle each month. He gave me the life I had always wanted. I started to care about having him in my life.

When he told me had four children, it didn’t matter. He also told me he loved me and wouldn’t leave me. It all sounded perfect.

I left school. The relationship continued. I don’t think I realised then how desperate I was to keep this thing going. I didn’t want to face the truth: if I was financially independent, we wouldn’t be together.

Then I fell pregnant. I realised how much trouble I was in when I broke the news to him and he started to ignore my calls.

I don’t have the money to support a baby or myself. I can’t be a single parent! I can’t handle the shame of what people must think of me and my family!

I can’t track him down and force him to take responsibility. He has turned his back on me. I was seduced by him and his money. It’s the worst choice I ever made.

If you’ve decided to have a relationship in exchange for financial support, you need to know the risks. Older men have a much higher chance of having sexually transmitted infections including HIV. Use a male or female condom every time you have sex to protect your own life.

This story was written by a Tune Me community member.