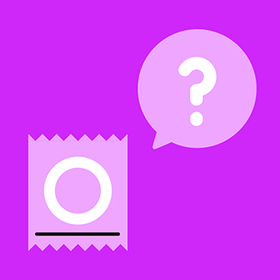 That’s rubbish. First of all, there are different sizes. Second, all condoms stretch and can fit every size (and even over your head).

Myth: I can whip on a condom just before I come.

Wrong. You must put it on before any sexual contact happens. Men leak fluids from their penises before and after ejaculation. This fluid can carry enough sperm or germs to transmit HIV, STIs and possibly cause pregnancy. Not to mention that the penis is coming in contact with the fluids in the vagina, putting the guy at risk for STIs and HIV.

Myth: I can wash and re-use a condom.

Wrong. You need to use a new one every time you have sex, even for oral sex. After 30 minutes of use a condom becomes easier to break, so you should change it. If the condom breaks during sex, withdraw from your partner and put on a new condom.

Myth: I use cling film or other plastic if I don’t have a condom handy

Wrong. Only condoms have the strength to protect you. It is the only thing that can be put on a penis to help protect you from an unplanned pregnancy or potential sexually transmitted infections (STIs). Rather wait until you have one handy.

Myth: I can use oil to lubricate it.

Myth: Condoms take all the pleasure away.