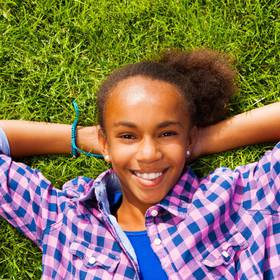 Scientists have some clue as to why guys get a crush - and it's not what you think girls! While many mistakenly believe that guys are drawn to girls for purely physical reasons (think big boobs and wide booty). Scientists say that their research proves otherwise.

They discovered that men are most attracted to:

The study revealed that men are most attracted to girls who stand up straight and tall. This makes anyone look proud and good but it also gives a girl an arched back and prominent butt. The scientists said this posture attracts men on a primal level - because historically females arched their backs and stuck out their rears when they were about to mate.

The investigation also showed that a girl's clean "natural scent" played a role in attracting a mate. Apparently it subconsciously alerted them that they had strong immune systems.

The guys interviewed as part of the study said that they all wanted a girl with a good set of teeth and a friendly smile as it shows good health and personal hygiene and grooming habits.

The guys also admitted to loving friendly eye contact, it flips a primal switch in his brain that either makes him retreat or want a girl more.

Finally, the scientists found that guys liked girl with clean hair. Clean, shiny hair is a sign of good health and good grooming.

Attraction seems to be a mix of so many things. Most of all it seems like simple things like good hygiene and health. What is it that draws you to a crush? Tell us below.